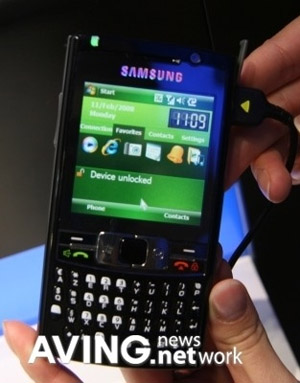 But, with the full complement of GPS, WiFi, 2 megapixel camera, 2.6-inch touchscreen, optical trackpad, microSD card slot, and QWERTY keyboard – all powered by Windows Mobile 6.0 – we don’t care what this handset is called. All we care about is seeing this beauty of a Windows Mobile smartphone hitting US shores in the near future.

We’re hoping it’s safe to assume that this Korean-variant of the Samsung i780 BlackJack III is just another stop Samsung is making on its way to the AT&T in The States. We’ve already seen the Samsung i788 BlackJack III pass through the FCC, so it’s only a matter of time before the successor to the highly acclaimed BlackJack II gets launched with 850/1900Mhz GSM frequency support.

Like any good federally-sanctioned frequency spectrum auction should do, the recently-wrapped Canadian AWS (advanced wireless spectrum) spectrum was auctioned off...