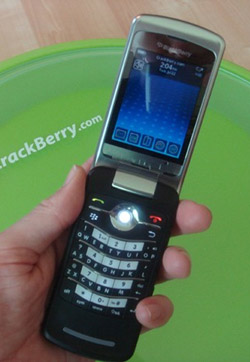 RIM first clamshell BlackBerry offering, the BlackBerry KickStart, has taken a back seat to the media-darling BlackBerry 9000 Bold of late, but that could all change in the near future. Alas, we’ll have to wait for RIM to actually announce the BlackBerry 8220 KickStart flip-phone before it gains some more marketing-steam. RIM has apparently decided to drop the KickStart‘s “9100” model number in favor of the 8220 and 8210.

Unfortunately, BlackBerry KickStart hopefuls looking for GPS functionality will have to forgo the WiFi radio in the BlackBerry 8210 KickStart.

Head on over to CrackBerry for the full hardware review.

Regardless of iPhone 3G activation woes and product shortages that has Apple backlogging iPhone 3G's at its retail stores for...