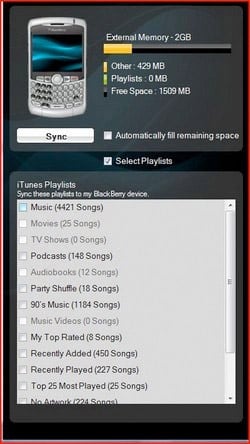 With the popularity of the iTunes store gaining ground as the online music and video store of choice, BlackBerry users have no doubt been waiting to get their coveted push-emailing handsets hooked up to iTunes. That day is nigh, my CrackBerry addicts! RIM has finally released their BlackBerry Media Sync software to all their BlackBerry Pearl, Curve and 8800-toting customers itching to download some iTunes tracks to their handset.

As expected, the BlackBerry Media Sync software will give current and future BlackBerry handsets (BlackBerry Bold, we’re looking at you) the ability to sync music and playlists directly from iTunes.

Just don’t go skirting your duties in the office just so you can listen to the new Justin Timberlake track that you downloaded from iTunes, ‘kay?