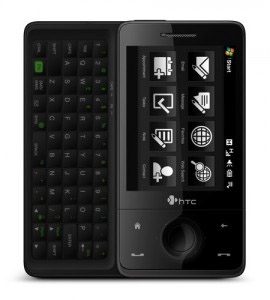 HTC sure has the FCC keeping busy with their different variants of their flagship smartphones – when they’re not reviewing designer handsets, that is.

While the rest of us wait for HTC to bring their US-spec HTC Touch Diamond with US-friendly 3G radios (850/1900Mhz) in tow, HTC has been busy pushing their HTC Touch Pro Raphael through the FCC’s approval process in GSM-form.

The HTC Touch Pro (codename: Raphael) basically adds a slide-out QWERTY keyboard to the HTC Touch Diamond’s sleek profile. But, don’t think for a minute that the additional keyboard hardware will make the HTC Touch Pro a bloated piece of kit. Hands-on reviews have indicated that the HTC Touch Pro is about as svelte a smartphone as you can expect, even with that sliding keyboard on-board. And, don’t forget about that gorgeous VGA touchscreen display!

Unfortunately, the HTC Touch Pro that we’re seeing here is the non-US variant. Just as we saw with the HTC Touch Diamond, HTC is pushing their European variant through the FCC prior to the US-variant. That means we won’t be seeing US-friendly 3G frequency support on the this particular HTC Touch Pro – so you won’t be surfing AT&T’s 3G network with this here HTC Raphael variant.

HTC released their quad-band ROM for the HTC Touch Diamond, enabling 850Mhz EDGE support, and it seems that they’ve given their HTC Touch Pro the same quad-band treatment. So, eager-beaver HTC Touch Pro hopefuls that just can’t wait for the US-spec Raphael can at least get jiggy with EDGE data speeds in the US.

Orange looking to pick up iPhone 3G in UK?

The iPhone 3G has already launched in the UK, simultaneously with dozens of other countries around the world, but that...