Calling the iPhone 3G a success is a bit of an understatement. Cupertino set the stage for frenzied iPhone 3G demand across the globe with the original iPhone and demand likely isn’t going to die down anytime soon. With iPhone 3G stock shortages reducing the initial rush of iPhone 3G subscriptions down to a relative trickle, Apple has been ramping up production in their Taiwanese manufacturing plant to try and meet stock-depleting demand. But, the big question is, just how many iPhone 3Gs does Apple plan to produce in their first year of iPhone 3G sales? 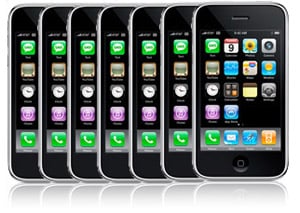 According to a source “close to Apple,” the iPhone 3G production ramp has hit 40 million units for the first 12 months of production. The production number equates to an impressive 800,000 units being churned out of the Foxconn manufacturing plant every single week. Foxconn is Apple’s component integrator in Taiwan, and the company recently expanded their operations in anticipation of increased hardware orders from the likes of Apple.

Still, Foxconn is estimated to be working above capacity. Even with newly expanded production capacity, 800,000 units per week is not a small number, by any measure. And, the incredible production volume has led to speculation that the new batch of iPhone 3Gs coming out of Taiwan may be more prone to manufacturer defects. The sheer volume of iPhone 3G production could lead to a decrease in quality control, which means more potential problems for Apple down the road.

The new estimates for iPhone 3G production utterly eclipse previous speculation on Apple’s production ramp, following unrelenting demand from consumers around the world. And, with 50 more countries expected to welcome the iPhone 3G later this year (20 of which will go live with the iPhone 3G on August 22), Apple’s logistical aptitude will be put to the test.

But, if Apple does manage to produce, and more importantly sell, the estimated 40 million iPhone 3G handsets over the course of 12 months, they’ll have gone from a virtual non-competitor to a serious player in the global smartphone market.

AT&T might have the exclusive rights to hock iPhones, specifically iPhone 3Gs, in the US, but that doesn't mean the...