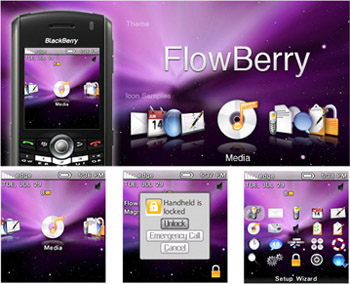 Here’s the theme for all the Mac fans out there using a BlackBerry smartphone. If your company can’t or don’t want to buy you an iPhone, you can still enjoy the “Apple experience” on your CrackBerry, while extending your push-email addiction at the same time.

The theme is called Flowberry and it features a pseudo Cover Flow, making a BlackBerry device look as Apple-ish as possible. The problem, though, is that the home screen icons are locked in. That may not be the issue in case you only need a fast access to the basic stuff. Unchangeable home screen icons are: Messages, Calendar, Address Book, Media, SMS/MMS, BlackBerry Messenger, MemoPad, and Keyboard Lock. If that’s good enough for you hop over to Bplay’s website (the folks behind the theme) and grab Flowberry for $6.99. All BlackBerry models are reportedly supported, though animation performance is optimal with software 4.3 or higher.

A short demo of the theme in action follows after the jump.

Bell Mobility to add BlackBerry Pearl in white and titanium, Curve 8330 in red

Canada's Bell Mobility will be adding new color options to its existing BlackBerry smartphone offering. As far as we know,...