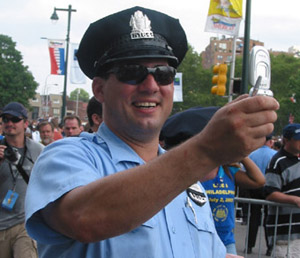 Cameraphones. They’re everywhere these days. From James Bond to your grandmother, cameras in cellphones are a fact of life. And, cameraphones are good for more than just taking badly-framed self-portraits or the occasional candid photo on the street, they can also be used to fight crime. At least that’s the way the New York Police Department sees it.

The NYPD has announced that they will be embracing cameraphone (and any other camera or video camera) technology in their fight against wrong-doers in the city that never sleeps. Following an incident, last year, involving an act of police brutality caught on video and posted to YouTube, the NYPD will be inviting its citizen sleuths to send in pictures and videos of any criminal actions – whether the illegal acts are being carried out by citizens or police officers. The move mirrors cameraphone initiatives in Boston and Cincinnati, enlisting the citizen brigade in the fight against crime.

“We’re putting that technology in place to enable us to do that,” said Police Commissioner Ray Kelly. The NYPD will soon have a service that allows regular Joe Cameraphone to send in a picture or video of malcontents in action. With a veritable army of detectives, armed with cameraphones, roaming the city’s streets, the new picture messaging initiative has the potential to bring true justice to NYC.

Flowberry theme brings Mac OS look to a BlackBerry near you

Here's the theme for all the Mac fans out there using a BlackBerry smartphone. If your company can't or don't...