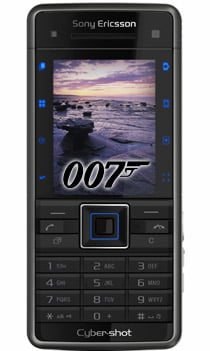 Sony Ericsson has just announced that James Bond’s latest phone will be the limited edition Titanium silver C902 Cyber-shot. The famous secret agent will rely on the C902’s 5 megapixel camera in the upcoming blockbuster Quantum of Solace, which will be released in November of this year.

UPDATE: Expansys contacted us with an image of the device. James Bond will be using this beauty (on the right). And in case you’re wondering, Expansys will be offering the device — you can pre-order it today.

Specs wise, the limited edition C902 is identical to the original device, but also includes such pre-loaded content as 007 branded screensavers, wallpapers, James Bond mobile theme, Quantum of Solace movie trailer, behind the scenes interviews and footage from the movie and its stars, and the “Top Agent” game.

The Sony Ericsson C902 Cyber-shot in Titanium Silver will be available in selected markets in Q4 of 2008 for a limited period. No information about the pricing has been given.

UPDATE2: We have one more image of the device. It follows right after the break.