The iPhone and iPhone 3G have been and are offered with storage capacities of 16GB at most. While many will find the 16GB is more than enough to store all their music, pictures, emails, and a good chunk of their video library, there are those out there with media libraries that can easily eclipse the iPhone 3Gs 16GB of flash memory. For those people, 16GB is a good compromise between media portability and handset size and cost, but far from an ideal storage capacity. 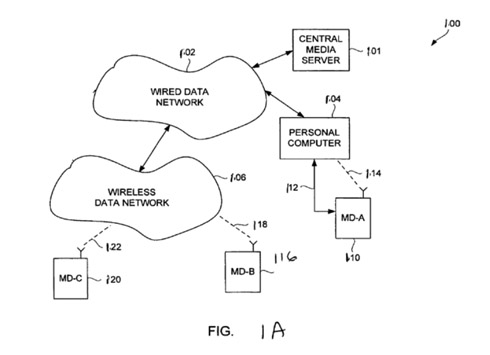 Not only does a physical storage limit require users to pick and choose which media is transferred to the iPhone, but transferring 16GB (or more) of data (music, videos, pictures) can take quite a long time. Synchronizing the iPhone with just a few GB’s of data has proven to take longer than is convenient.

To that end, Apple is looking to bring almost infinite storage capacity to their iPhone and iPhone 3G handsets. The move would allow heavy media-users to virtually keep all their media on their iPhones, without having to pick and choose what music albums or videos make the cut in to the iPhone’s limited memory banks.

The breakthrough in endless storage capacity wasn’t made in flash memory technology or miniature hard drives, but rather in a fundamental change in the way Apple handles media storage. A recent patent application has come to light that details technology that would have iPhones and iPhone 3Gs streaming media, in real-time, from their desktop iTunes libraries.

“For instance, a personal computer can be turned on and connected to the Internet to enable a portable device to access the media items stored on the personal computer,” according to Apple.

Rather than having massive iTunes libraries sitting in their home computer, inaccessible to iPhones in the wild, future versions of iTunes and the iPhone’s Mac OS may allow users to stream the media wirelessly over the air to their handset. The technology relies on storing just the meta-data associated with the media content, which sports a significantly (1% or less of the media’s total file size) smaller footprint, in the iPhone’s flash memory. The metadata describes a media file’s attributes – file size, title, artist, creation date, etc. – but not the actual media content itself.

The “lightweight” metadata would in turn be represented on the iPhone as “virtual media items” that depict all the media stored on the home computer – playlist, video, photo, and mobile games. With smaller file sizes, metadata-as-media-items could increase iPhone storage by 100-fold. That 16GB iPhone may just be able to store 1600GB of media (or more) in the near future.

“As a result, the user perceives that the virtual media items may be available on the [the media player],” Apple said. “In this manner, the virtual capacity of an electronic device may be increased.”

The patent application also allows for remote iTunes library management. iPhone users could reorganize, add, or delete media in their iTunes library while away from their computer. And, should the connection to the computer degrade or be lost, the remote control technology would pause or stop data transmissions to preserve media-file integrity. Additionally, iPhone and iPod users may see peer-to-peer device communications – the kind of device-to-device communication made popular by the Microsoft Zune.

The iPhone’s 16GB storage limit will likely make way for a new 32GB storage limit with Apple’s mid-cycle iPhone 3G refresh next year, so power users will have a near-term storage boost to look forward to. But, in the long run, we could see remote media access taking the stage to allow for storage capacities reaching upwards of hundreds of gigabytes.

HTC has proven time and time again that they're the peoples' smartphone maker. With relatively frequent software updates and widely...