T-Mobile’s up-and-coming 3G network is definitely something the company should be promoting to no end. Perhaps T-Mobile is waiting for their nascent 3G infrastructure to expand it footprint a bit more before they go about touting their faster data speeds and improved voice quality, but they should still be promoting compatible handsets as having 1700Mhz 3G frequency support.

Alas, the higher-ups at T-Mobile apparently don’t want to make it known that some of their currently available mobile phones can actually surf T-Mobile’s network at 3G speeds. And, that philosophy will carry over to upcoming handset releases. Case in point, the Sony Ericsson TM506 Bella. 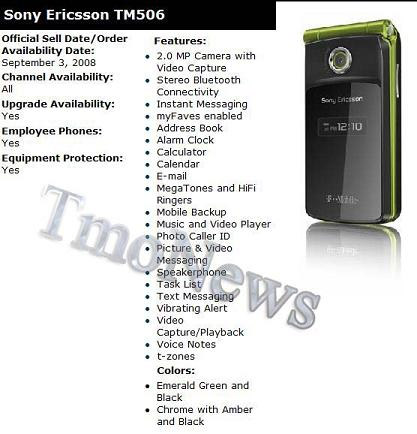 We’ve had our eye on the Sony Ericsson Bella for some time, and the slick clamshell should do well with aGPS, web-feeds reader (RSS, podcasts, news), 2 megapixel camera, and support for 3G (UMTS/HSDPA) on the 1700Mhz and 2100Mhz frequency bands.