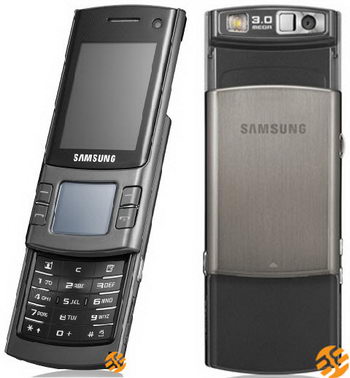 Samsung would be crazy not to use/extend the success of its best-selling Soul handset. We’ve seen them going pink and even releasing the candybar version of the device.

Now they decided to go back to their “slider roots” with an idea just to tweak specs a bit and make the device more affordable to the mass market. The result is called Soul S7330.

The stylish device is bit crippled and more plastic-ish when compared to its “original cousin” but it’s a solid mid-ranger, nonetheless. There’s a quad-band GSM/GPRS/EDGE radio (850/900/1800/1900 MHz) on board, HSDPA support (up to 3.6 Mbps), 2.2-inch QVGA screen, 3.2 megapixel camera with LED flash and face recognition for photo taking, CIF front camera for video calls, FM radio with RDS, Bluetooth, media player, and a 800 mAh which should deliver up to 350 hours of standby and 7 hours of talk time. Plus, let’s not forget the Soul’s trademark – Interactive “Magical Touch” DaCP display/touchpad. As for the size, the Samsung Soul S7330 measures 105×49.5×14 mm and weighs 110 grams.

According to sources, once it’s released next month, the Soul S7330 would cost around $500 which is kinda expensive. Don’t you think?

T-Mobile's up-and-coming 3G network is definitely something the company should be promoting to no end. Perhaps T-Mobile is waiting for...