And the HTC Dream leaks keep on coming. Not that we mind, or anything.

Following on the recent publication of the HTC Dream’s length and width dimensions, courtesy of the FCC, a newly leaked scale wire-frame mockup of the HTC Dream gives us a glimpse of what to expect when the HTC Dream G1 launches in the not-too-distant future.

The rightmost diagram includes measurements that can be applied to the rest of the scale mockups. In doing so, we find that the HTC Dream G1 is likely going to hit somewhere between 16mm and 17mm in thickness. That means the HTC Dream will be portlier than the iPhone but slimmer than the QWERTY-wielding HTC Touch Pro and Sony Ericsson XPERIA X1. 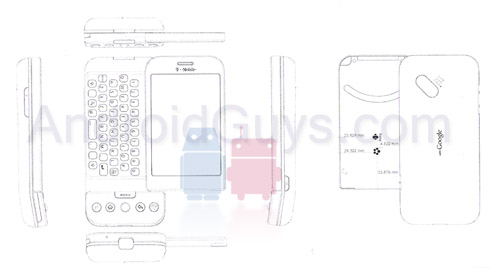 And, adding a little bit of a twist to our HTC Dream-story, the HTC Dream looks to be sporting a bit of a “chin.” The lower-section of the device – below the huge touchscreen (how huge, we still don’t know) – sports a “kicked out” lip. There’s speculation flying around that the HTC Dream will be an “arc slider” with that “chin” tilted toward the user. We’re not sure if the “chin” will make it to final production, and we’re not sure if we like it or not.

So, to sum it up, we know that the HTC Dream will be sporting the long-awaited Android OS, a gloriously high-resolution touchscreen display, super-fast CPU, slide-out QWERTY keyboard, and the regular assortment of high-end accouterments befitting a smartphone of the HTC Dream’s caliber. Now, we have the dimensions of the device – 115 x 55 x ~16.5 mm – and a darn good idea of the HTC Dream G1’s overall design.

Now, the next step is to get one of these badass Android-powered smartphones in our hands. With a little luck, the HTC-gods will drop off an HTC Dream at our doorstep sooner rather than later.

HTC today announced a new smartphone - S740. The new device packs everything the Touch Diamond has except for the...