Hardware, software, firmware, or networks. No one really knows what’s going on with the iPhone 3G that’s causing all these network problems, but new data points to the problems being rooted in the wireless network itself.

At this point, we can rule out the iPhone’s antenna as causing the network issues. And, Apple has announced that their iPhone 2.0.2 OS should help alleviate some 3G connectivity woes. 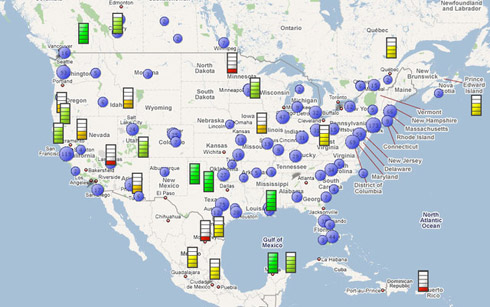 The latest data from Wired’s global iPhone 3G data speed survey allows for some interesting interpretation. The data shows that the iPhone 3G sees the highest wireless data speeds in countries with fully-mature 3G infrastructure capable of serving up 3G data at faster-than-US speeds. On the downside, the data also shows that the US wireless infrastructure is likely to blame for our iPhone 3G’s data sluggishness.

So, what’s the deal? AT&T hasn’t had the extra three years worth of 3G development that our European friends enjoy. And, as such, Yankees have to suffer with an immature 3G network to use with our iPhone 3Gs. But, it’s not like we didn’t already know about the US’s woefully lagging wireless networks.

Just over a month into the iPhone 3G's global sales push, it seems that Apple is about to see their...