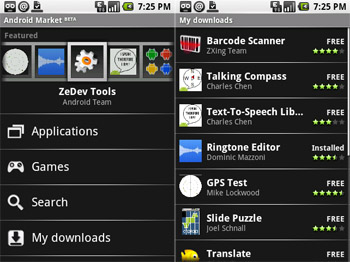 Back in May, we wrote about Google’s apparent plans to introduce an Apple-like AppStore for its Android platform. Well that’s confirmed now, with the official Android Developers Blog posting an article on the subject.

First of all – it’s not a store, it’s a market, because they feel developers should have “an open and unobstructed environment to make their content available” (unlike Apple’s AppStore?). Second, being an open platform means there will be tons of apps available for the users. To help future Android-powered handset owners make decisions, Android Market will have a feedback and rating system similar to YouTube, enabling community to filter things out for the rest of us.

As for the developer, they will be able to quickly put their apps available for the grab — the process is explained as easy as publishing a video on YouTube, consisting of three steps: registration, upload and description of the newly uploaded app. Additionally, Google will provide developers with a “useful dashboard and analytics to help drive their business and ultimately improve their offerings.”

Initially, the first beta version of Android Market will support free apps, only. Paid applications will be added later, and so will be other features like versioning, multiple device profile support, analytics, etc.

Back in January, we covered the mobile social media platform Next2Friends. Now they've announced the availability of their innovative "Live"...