Leave it to Boy Genius to get their hands on internal documentation from AT&T that gives us insight in to the BlackBerry Curve 8320’s future on AT&T’s network. 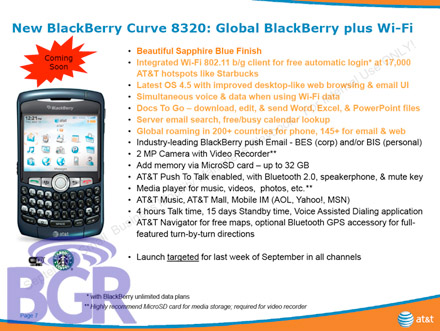 The BlackBerry Curve 8320 will apparently hit AT&T with the same 2 megapixel camera, microSDHC card slot, and Bluetooth 2.0 that we’ve come to expect. Look for the Sapphire Blue BlackBerry Curve 8320 to drop in the last week of September. Pricing information isn’t available yet, but expect subsidized pricing to be fair and affordable.

AT&T and Sierra Wireless released the AT&T USBConnect Mercury, the newest and smallest HSPA-capable LaptopConnect device to date. Designed and...