Verizon has yet to push out a true competitor to the iconic iPhone and iPhone 3G from big-dog competitor AT&T. The CDMA carrier has been expected to be bringing the BlackBerry 9530 Storm, formerly known as the BlackBerry Thunder, on board as their iPhone- 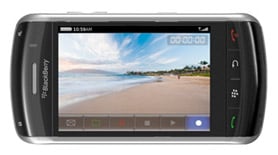 fighting touchscreen handset. And, as RIM’s first touchscreen BlackBerry handset, Verizon has something of an exclusive here.

Verizon reportedly still has to work out the sluggish bugs and polish the UI up a bit before releasing it to the general public. If past BlackBerry enthusiasm repeats itself for the first-ever touchscreen BlackBerry, we’ll be seeing droves of BlackBerry fans lining up to grab their own BlackBerry Storm.

While the rest of the wireless world scurries about, trying to one-up the competition's network reliability claims with all manner...