It looks like our immature, underdeveloped 3G wireless network infrastructure hasn’t stopped the US from passing-up Western Europe  in terms of 3G subscribers. According to comScore, 28.4% of US wireless subscribers have hopped on board the 3G bandwagon. Compare that to the 28.3% of western European wireless customers with 3G handsets in tow, and it’s apparent that the US has edged past Europe in 3G market penetration. 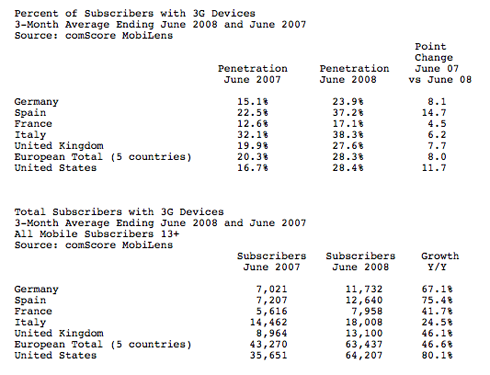 The US has seen an 80% increases in 3G usage since last year, which is impressive to say the least. With 3G handsets like the iPhone 3G and the Samsung Instinct burning up the 3G networks of AT&T and Sprint alike, it makes sense that the US has one-upped Europe in the 3G-game. And, with all new worthwhile handsets sporting 3G radios, the US isn’t likely to see much decline in 3G usage.

Talk about a lame excuse. Apple, long known as the tech-company that does whatever it feels like doing, has rejected...