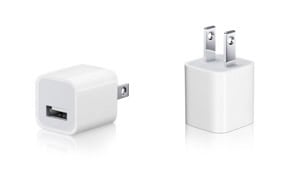 Apple’s tiny little cube-shaped AC power adapter that comes bundled with all new iPhone 3G’s apparently has a bit of design flaw. The metal prongs extending from the iPhone 3G wall-charger cube are reportedly an electrical hazard. Apple cites rare and scattered reports of some “Ultra Compact USB Power Adapter” metal prongs breaking off and remaining stuck in an electrical outlet. Thankfully, no injuries related to broken prongs have yet been reported.

“We have received reports of detached blades involving a very small percentage of the adapters sold, but no injuries have been reported,” says Apple.

The iPhone 3G power adapter is being recalled to prevent any possible injuries that could have Apple staring down the barrel of expensive class-action lawsuits. Apple says that iPhone 3G users should stop using the cutesy iPhone 3G charging-cube to charge their handsets – instead, using the standard charger with a fold-out prong design or using a computer USB port to charge the iPhone 3G through the USB cable. 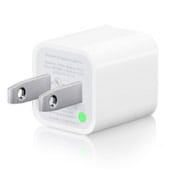 Apple says that it will start replacing all recalled iPhone 3G charging-cubes through their retail store locations or online starting October 10. Charging-cubes with a green dot imprinted on the bottom are said to be safe and don’t need to be replaced.

The recall only affects iPhone 3G users in the US, Japan, Canada, Mexico,and several Latin American countries. If you didn’t get your iPhone 3G or separately purchased the Ultra Compact USB Power Adapter in any of these countries, consider yourself in the clear.

It was inevitable. With a 3.8-inch WVGA display that completely dominates the entire front-face, and a form-factor that seems to...