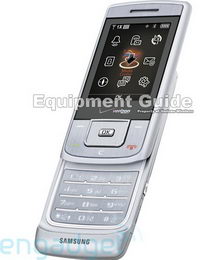 Verizon will be adding two mid-range devices on October 6th.

First of the two is the Motorola VU30 Rapture, which we’ve already seen while passing the FCC hurdle. Let me recap again – the glossy clamshell packs 2 megapixel camera, GPS, EV-DO, Bluetooth, music player, and a memory card slot. Could be yours for $179.99 with a two-year agreement or $299.99 sans any contracts.

Then there’s the Samsung u650 Sway (pictured on the right), a 0.47-inches thin slider which apparently misses 3G. However, it does come with a 2 megapixel camera, music playback software and we guess a Bluetooth support. Should be available next week for $119.99 on a two-year, or $239.99 contract-free…

What kind of Mobile TV?

Interesting one, this one - the "Daily Mail" (which is a popular newspaper in the UK) has a story online...