If you’re anything like us, you’re probably fighting a bit of a drinking problem and a debilitating gadget addiction waiting in hand-wringing anticipation for T-Mobile to go live with the first-ever Android-powered smartphone – the T-Mobile G1 (HTC Dream). T-Mobile made their T-Mobile G1 announcement not too long ago, but it seems like an eternity until the carrier actually launches the Android-powered G1 in the US. And, as great as they are at keeping us distracted until launch-day, T-Mobile G1 (and HTC Dream) pictures and videos get tired real fast.

So, it’s a good thing T-Mobile saw fit to give Android-hopefuls something a little more tangible to hold them over until October 22. T-Mobile has just posted a T-Mobile G1 emulator on a dedicated T-Mobile G1 web portal. After taking a 360 degree tour of the HTC-sourced T-Mobile G1, the online emulator gives you a sneak peak at the G1’s Android interface and navigation controls. 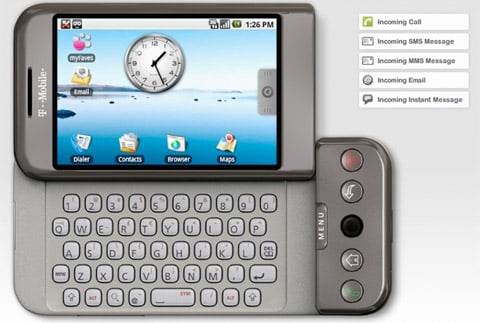 Granted, you won’t be able to actually make calls or send emails, but the T-Mobile G1 emulator should help you familiarize yourself with Android and the G1’s controls well ahead of the handset’s launch later this month. Find the T-Mobile G1 online emulator here.

How does the Android OS measure up to the iPhone OS? Head on over to the T-Mobile G1 emulator and find out – then come back and leave a comment about your experience.

Sony Ericsson is the official handset of 2010 FIFA World Cup

Sony Ericsson has recently announced that it has been appointed the Official Mobile Phone Handset of the 2010 FIFA World...