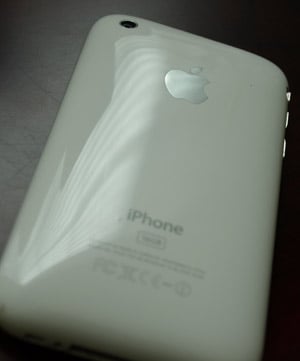 With massive iPhone 3G sales spurred by the iPhone 3G buy-up craze that defined the iconic cellphone’s US launch, the iPhone 3G is currently one of the hottest handset in the US.

“The launch of the lower-priced iPhone 3G was a boon to overall consumer smartphone sales,” said Ross Rubin, director of industry analysis for The NPD Group. “While the original iPhone also helped win customers for AT&T, the faster network speeds of the iPhone 3G has proven more appealing to customers that already had access to a 3G network.”

It’s clear that the iPhone 3G has given AT&T a shot in the arm, boosting the carrier to higher highs.

So much so that 30% of iPhone 3G customers defected from other carriers for a chance to use the iPhone 3G on AT&T’s network. Of those carrier-defections, 47% came from AT&T’s top rival Verizon. A healthly 24% of defectors came from T-Mobile and 19% jumped the Sprint-ship for the good-ship AT&T.

The iPhone 3G is clearly selling well ahead of smartphone launches from Sony Ericsson (XPERIA X1), HTC (Touch HD), T-Mobile (G1), and Nokia (5800 XpressMusic Tube). As the top-dog in the US smartphone market, these new entrants are going to have a bit of a race to overtake the iPhone 3G. But, with more powerful features (like WVGA touchscreens and high megapixel cameras) and new mobile platforms (like Android and the Sony Ericsson Panel UI), the iPhone 3G could have some stiff competition. Apple is going to need to step up their game to keep the newcomers at bay. Could we see a price-drop on the iPhone 3G for this holiday shopping season?

PORT WASHINGTON, N.Y., Oct 06, 2008 (BUSINESS WIRE) — According to a new report from The NPD Group, the leader in market research for the wireless industry, 30 percent of U.S. consumers who purchased Apple’s new iPhone 3G from June through August 2008 switched from other mobile carriers to join AT&T, the exclusive mobile carrier for the iPhone in the U.S. By way of comparison just 23 percent of consumers, on average, switched carriers between June and August 2008. Nearly half (47 percent) of new AT&T iPhone customers that switched carriers switched from Verizon Wireless, another 24 percent switched from T-Mobile, and 19 percent switched from Sprint.
“The launch of the lower-priced iPhone 3G was a boon to overall consumer smartphone sales,” according to Ross Rubin, director of industry analysis for The NPD Group. “While the original iPhone also helped win customers for AT&T, the faster network speeds of the iPhone 3G has proven more appealing to customers that already had access to a 3G network.”
According to NPD’s “iPhone 3G Report,” before the launch of the iPhone 3G, iPhone sales represented 11 percent of the consumer market for smartphones (January through May 2008); however, after the launch of iPhone 3G, Apple commanded 17 percent of the smartphone market (January through August 2008).
The average price of a smartphone sold between June and August 2008 was $174, down 26 percent from $236 during the same period last year. During June through August 2008, the top four best-selling smartphones based on unit-sales to consumers were as follows:
Methodology: The NPD Group compiles and analyzes mobile device sales data based on more than 150,000 completed online consumer research surveys each month. Surveys are based on a nationally balanced and demographically-representative sample, and results are projected to represent the entire population of U.S. consumers. Note: Sales figures do not include corporate/enterprise mobile phone sales. For more information about NPD’s offerings in this business sector, visit http://wireless.npd.com.
About The NPD Group, Inc.
The NPD Group is the leading provider of reliable and comprehensive consumer and retail information for a wide range of industries. Today, more than 1,600 manufacturers, retailers, and service companies rely on NPD to help them drive critical business decisions at the global, national, and local market levels. NPD helps our clients to identify new business opportunities and guide product development, marketing, sales, merchandising, and other functions. Information is available for the following industry sectors: automotive, beauty, commercial technology, consumer technology, entertainment, fashion, food and beverage, foodservice, home, office supplies, software, sports, toys, and wireless. For more information, contact us or visit http://www.npd.com.
SOURCE: The NPD Group, Inc.

Last week RIM co-CEO Mike Lazaridis addressed the ongoing frustration of many consumers still waiting for the BlackBerry Bold in...