When it comes to “openness” there are few tech companies (if any) more secretive than Apple. With their iPhone developer NDA recently lifted, however, Apple might be turning a new leaf – “might” being the operative word here. For now, things are business as usual for the locked-down iPhone maker.

The latest iPhone 2.2 OS that was seeded to iPhone developers has apparently unveiled a few hidden cards up its sleeve. Apple has officially listed only “compatibility testing” as the only change included in the iPhone 2.2 OS, but developers have uncovered some juicy features within the iPhone OS framework. In addition to the refreshed iPhone Safari UI, we’re hearing that iPhone 2.2 OS should include support for text auto-correction toggle, Emoji icons, and Google Maps Street View. 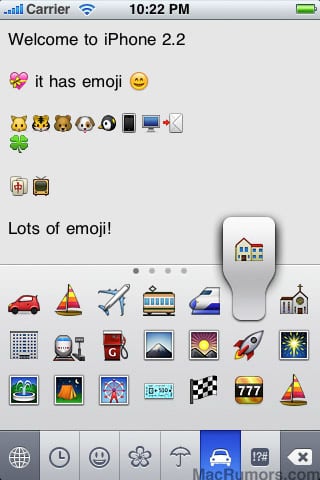 Another discovery has confirmed that the iPhone 2.2 OS will also feature a toggle switch for the auto text-prediction feature. Auto-correction can be a useful tool for iPhone speed-typers looking to tap out longer emails, but the feature can sometimes get in the way. As such, an online petition garnering more than 20,000 signatures pleaded with Steve Jobs to release an auto-correction toggle switch. All the clamoring seems to have paid off, and Apple will likely release the text auto-correction feature in the next major release of the iPhone OS.

And, on a note that might be more attractive to our Japanese counterparts, the iPhone 2.2 OS apparently includes support for Japanese Emoji icons. The iPhone 3G’s lack of Emoji icons – little picture characters used to spice up messages – has been cited as a major oversight in the Japanese market. iPhone 2.2 OS includes 461 Emoji icons, enough to keep even the savviest users busy with icon-goodness.

Of course, until Apple goes on record with iPhone 2.2 OS features, this is just speculation. We have confidence that we’ll see Google Maps Street View, Emoji icon support, and auto-correction toggle in iPhone 2.2 OS, but don’t bet the farm on it.

Apple’s iPhone 3G is second best-selling US mobile phone, No. 1 US smartphone

In a move that takes a page straight out of Motorola's RAZR playbook, Apple has rocketed to the top of...