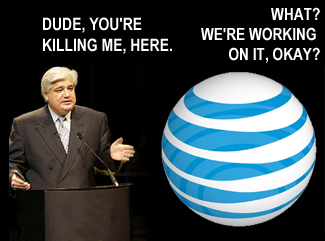 Last week RIM co-CEO Mike Lazaridis addressed the ongoing frustration of many consumers still waiting for the BlackBerry Bold in the U.S: “There’s great scrutiny, as you might know, on that network and a certain device. So I guess everyone wants to be sure on every last test.” To think that the latest in the BlackBerry line has been delayed for several months due to simple quality assurance seems a little unlikely, especially since we had a niggling suspicion that AT&T might be having some network issues. Regardless, an AT&T spokesperson has assured us that the Bold will be landing before the end of the year, and with launch parties happening throughout the month, November seems like a real possibility. Who’s sick of waiting? Show of hands?