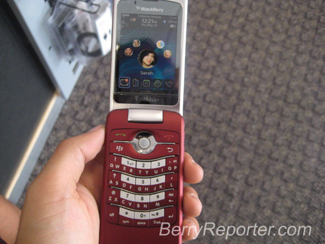 If there were a sign that the T-Mobile BlackBerry 8220 were just about to hit the shelves, a hands-on video and dummy units in store would be it. The BlackBerry Pearl Flip has received a lukewarm reception at best among the BlackBerry faithful, but is in a good position to worm RIM’s way into the more mainstream flip market. Outside of the new form factor, there are plenty of features that further differentiate it from the BlackBerry standard: larger keys, external LCD screen, and a recessed trackball. The 8220 is already available in Italy, but you can expect this one to be available around October 16th. for $149.99 on a two-year plan with mail-in rebate.

Hands-on with the BlackBerry 8900

Yesterday T-Mobile Germany gave us a glimpse of the BlackBerry 8900, successor to the Curve line, and now it's time...