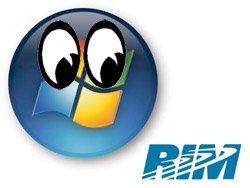 There’s no denying that the current economic trade winds on Wall Street are blowing towards greater and greater losses as investors scramble for cash in this credit-strapped market. But, the meltdown in trading markets around the globe isn’t all bad news. For some (companies with the cash reserves to take action), the precipitous drop is stock prices has resulted in some bargain-basement deal.

Case in point, Microsoft is believed to be eyeing BlackBerry-maker Research In Motion (RIM) for a possible takeover bid. With RIM’s stock price down to the mid-$50 range, Microsoft may just be waiting to leverage its huge pile of cash in move to takeover RIM. Microsoft is facing increasing pressure from Internet Search giant Google, and with the unveiling of the first-ever smartphone to be powered by Google’s Android mobile OS, Microsoft might be mulling a jump into handset manufacturing-game.

RIM has seen its stock values plummet from a high of $148 on the Nasdaq just four months ago to its current sub-$60 valuation. The drop in stock price represents an incredible bargain for Microsoft. “RIM is a massive strategic fit” for Microsoft, said Canaccord Adams analyst Peter Misek. “I’m fairly certain they have a standing offer to buy them at $50 (a share).”

Should RIM see their stock price continue to slide (down to the $40 level), Microsoft could be well positioned to make a takeover bid at a premium offering of $50. With RIM’s experience in handset manufacturing and software development, Microsoft could make a serious push to capture a significant chunk of the global smartphone market. Windows Mobile-powered BlackBerry handsets in the near future? We’ll see…