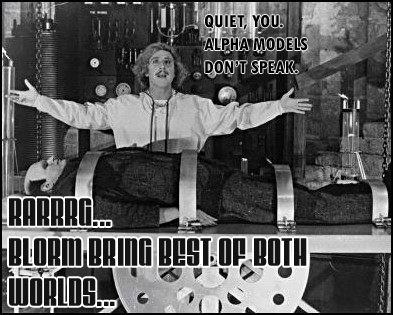 Rumour has it RIM is hard at work on not only second and third generation BlackBerry Storms (Wi-Fi, maybe?), but also a new device with a 5-megapixel camera,1 GB of memory and a “near-HD” quality screen. Are we talking “HTC Touch HD”-HD, or what? The BlackBerry Bold made a big jump in display quality, but if RIM could double up yet again and get into the WVGA end of things, they could start swinging punches with the big boys. Form-factor is as yet undecided, but could potentially be something mashed up between the Bold and the Storm.

I’ve been holding out for a slider BalckBerry for a long time now, and I think with them experimenting with other styles like flip and touch, it’s a very real possibility. Of course, something along the Treo side of things would keep the BlackBerry closer to what it’s used to. Yeah, we’ve barely caught our breath from all of the latest BlackBerry models making their official debuts, but there’s always something in the pipes, right?

Verizon was getting a few TV teasers rolling just before the official announcement of the BlackBerry Storm a few days...