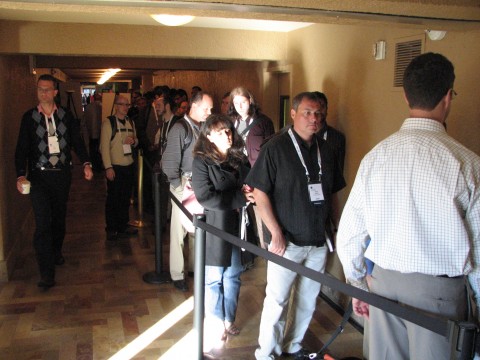 That’s around two corners. Youch. Can you see me from back there, Doug? Grabbing that first spot cost me some interview time (Sorry B*Nator, see you guys tomorrow), but well worth the bragging rights. Contrary to my brash assumptions that every, man, woman, child and pet at the convention would go after the Storm, that fine chap from TeleNav in the number two spot was actually picking up the BlackBerry Pearl Flip for his wife. Fellow blogger Al Sacco said he was going with the Bold because as fun as the Storm is, the Bold was something that he would actually use for work rather than just to fiddle with the funky SurePress touchscreen. The Storm also had two strikes going against it: it would be locked to Verizon and we wouldn’t get it until a month after the official launch. Booo.