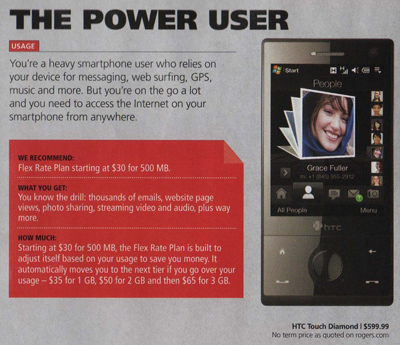 Latest reports have Rogers Wireless up in Canada (eh?) selling the HTC Touch Diamond for $599.99 with no contract. These reports stemmed from the latest issue of UR Magazine, a free publication to all Rogers Wireless subscribers (which is kind of weird to me… I’m a subscriber and I haven’t received this once!?). The HTC Touch Diamond was published in the magazine for $599.99 on no-contract. That seems like a lot of beans to me. Pricy indeed.

The Touch Diamond has yet to make any appearance on the Rogers site, and no release dates or contract details have been announced… But with news like this coming out now, you can bet release will not be too far off. Expect the usual 3-year contract to be offered from Rogers for best pricing. That seems to be the norm.

Oh, and fellow Canadians please don’t be mad about my ‘eh’ reference. I’m Canadian too.