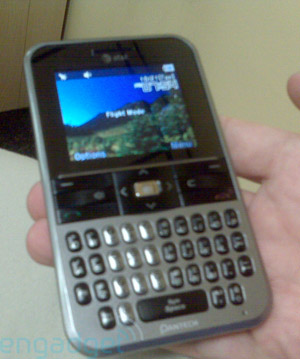 Pantech Slate in the wild

AT&T is really pushing its text messaging friendly lineup of QWERTY keyboard-toting handsets of late. The Pantech Slate is expected to drop on AT&T’s network as the “world’s slimmest” handset to sport a full QWERTY keyboard. And, thanks to Engadget Mobile, we’re given a look at the Pantech Slate in all its real-world glory. The color you see in the picture won’t be available at launch, but it’s good to see what the Slate looks like in-hand.

We can’t really comment on the Pantech Slate’s feel or usability, but the handset really lives up to it’s namesake. The “Slate” looks wafer thin in this picture.

The Pantech Slate should undercut the just-released AT&T Samsung Propel’s price-point. Text messagers will be happy to hear that the “world’s slimmest” QWERTY handset can be had for $49.99 with new contract.

Aside from the slim form-factor and the QWERTY keyboard, the Pantech Slate fills out the rest of its feature-set with a 1.3 megapixel camera, and will be available in Black and Royal Blue.