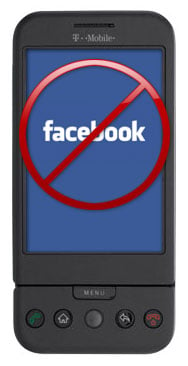 Facebook and Google haven’t been seeing eye-to-eye as of late. The first ka-fuffle arose when the social-networking giant blocked Google’s Friend Connect, citing security issues as the reason for the block.

Now the battle continues on as Facebook has revealed that they will not be releasing an app for the new open-source Android OS. This is in stark contrast to Facebook’s action on the iPhone and BlackBerry. If you carry either of those brands you’re probably aware that there are full-featured Facebook apps for both of those devices. The iPhone version I particularly enjoy.

Early adopters of the T-Mobile G1 will certainly be disappointing with this news, especially if they were expecting Facebook to appear in the immediate future. Don’t count out Facebook from appearing on the OS, however be prepared to wait. Facebook has commented that Google or another third party will have to develop the application for them, as they do not want to dedicate any resources towards developing an app for Android. They’ve also commented “Android sucks, it doesn’t matter.” Thems fighting words!

An interesting side note? Facebook is ad-served and invested in by good ol Microsoft… and we know that Microsoft is not quite Google’s biggest supporter. Conspiracy theory? Nah, but something to chew on 🙂

iSkoot, the folks who brought Skype to the Symbian platform (or at least the Skype branded product) and who provided...