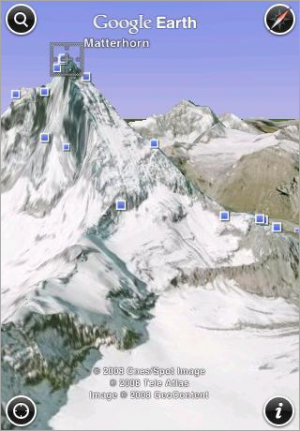 Google Earth for iPhone gives users the ability to whiz around the globe, zooming into particular locales and panning/tiling their perspective on a whim. Satellite and aerial images of Earth’s surface are stitched together to give the user a continuous 3D map of the globe – redefining what it means to have the “whole world in your hand.”

Google’s Local Search is integrated into the application, allowing you to search for a business or address and fly directly to that spot on the virtual globe. And, Geo-tagged Wikipedia articles and Panoramio are overlaid on the map, making location-based content discovery a breeze! 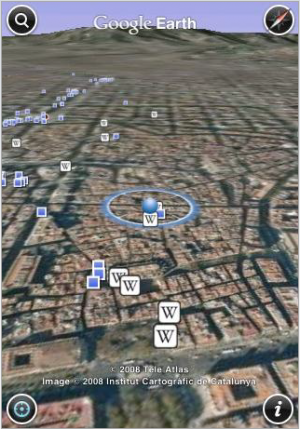 With support for the iPhone’s multi-touch display, moving around the Google Earth iPhone application’s 3D maps is actually a notch more intuitive than the desktop variant. Rather than relying on mouse-clicks  to control zoom-level, map rotation, and tilt-perspective, iPhone users can zoom, rotate, and move the map with double- and single-finger inputs.

Drag your finger across the map to move it around as you desire, pinch the screen to zoom in and out, or twirl two fingers to rotate the map view accordingly – it doesn’t get more intuitive than that! And, with built-in accelerometer support, Google Earth for iPhone allows the user to control their 3D perspective by simply tilting the iPhone. Tilting the iPhone changes the Google Earth map perspective, bringing terrain to life in full 3D!

Better yet, the iPhone Google Earth client will auto-rotate to landscape orientation when the iPhone is rotated sideways.

Google Earth for iPhone is surprisingly smooth and works quite well with a 3G data connection. Most impressive is the application’s ability to run most of its features on the iPhone hardware. Whether a testament to coding efficiency or the iPhone’s computing prowess, the Google Earth iPhone application shows just how far we’ve come in the mobile space since the early days of Google Earth in 2001 (when the application required what was then considered to be significant of desktop computing power).

The T-Mobile G1 is sure to have see healthy sales over the 2008 holiday shopping season. With the T-Mobile G1...