Looking to continue on the success of their iPhone 3G, Softbank has announced that they will be launching a terrestrial TV tuner / battery-pack add-on for the Japanese iPhone 3G market. 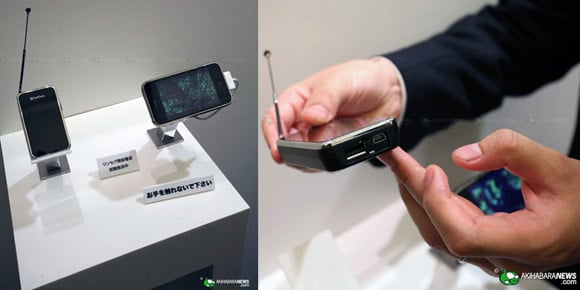 Softbank will be launching a 1-Seg (One-Seg) TV-tuner add-on that will pull down terrestrial TV broadcasts and beam them to the iPhone 3G. The as-yet-unnamed 1-Seg TV-tuner is expected to run $100 and will reportedly double as an external battery pack for the iPhone 3G.

The iPhone 3G TV-tuner from Softbank sports an external TV antenna to tune into terrestrial TV signals. The TV signal is then sent to the iPhone 3G via an internal WiFi radio. iPhone 3G users need only download a free iPhone application that tunes into the TV-tuner’s WiFi signal.

The One-Seg tuner doubles as an external battery pack

To be fair, the TV-tuner solution seems to be more of an after-though/response to complaints that the iPhone 3G lacks an integrated 1-Seg tuner. But, with the WiFi workaround allowing the tuner to be left in a purse or pocket while watching TV on the iPhone, it’s an acceptable solution.