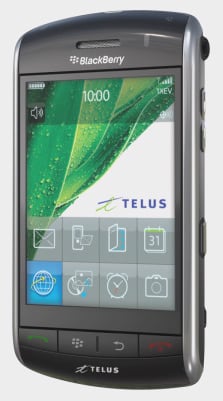 Both Verizon and Vodafone have been making a big to-do about the BlackBerry Storm, but both Canadian CDMA carriers, Bell and Telus, have been fairly quiet, despite having launched their notification pages on the announcement day just like everyone else. Well, Telus has updated their site to include a photo gallery, 360 view and some specs. Renders don’t quite do the real thing justice, but it does show that Telus is on board and ready to push RIM’s latest and greatest handset (although perhaps not with the same enthusiasm as Vodafone or Verizon).