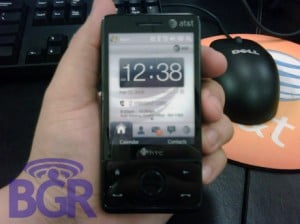 We’ve been waiting on pins and needles for AT&T to go live with their own-branded variant of the highly acclaimed HTC Touch Pro. With that beautiful full-VGA touchscreen display, slide-out QWERTY keyboard, 3.2 megapixel camera, GPS, WiFi, and 3G data connection, the HTC Touch Pro is definitely the premier Windows Mobile smartphone in the US. But, for those of you that can’t muster the wallet-dwindling price-tag for an unlocked HTC Touch Pro, the AT&T Fuze is a subsidized dream.

So, imagine our excitement when we heard that AT&T Fuze demonstration units were starting to pop up in AT&T corporate stores! The arrival of the AT&T Fuze at AT&T stores signals the near-term arrival of the AT&T Fuze, and it couldn’t come a moment too soon. With the holiday shopping season just over the horizon, AT&T is aiming to push their Fuze our to customers in time for the buying rush.

Keep an eye out for the AT&T Fuze!

A mid-November launch was sounding just dandy when rumours started coming out earlier this week, but it looks like the...