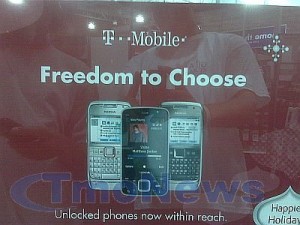 Unlocked handsets are most definitely the way to go in the GSM market. Without any SIM locks to keep you bound to a specific GSM network, unlocked handsets give the user the freedom to roam the world with the knowledge that they’ll be able to hope on voice and data networks almost anywhere.

And, so, talk of Best Buy preparing to sell unlocked handsets is high on our rumor-watchlist. Word on the street is that Best Buy will be selling unlocked Nokia handsets with and without contract-pricing. Best Buy is rumored to be offering Nokia handsets like the Nokia E71, Nokia N95, and Nokia N96 in unlocked form, complete with T-Mobile subsidies.

If true, we’ll be seeing Best Buy selling what could very well be the first unlocked, on-contract handset.

We’ll keep a close eye on this one.