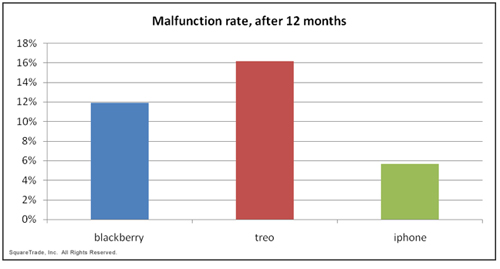 Man, not only is the iPhone beating BlackBerry in sales and customer satisfaction, but the latest study from SquareTrade is showing that BlackBerrys malfunction about twice as much as an iPhone. Ouch. The survey gathered results from 15,000 handsets over the course of a year, which showed that 11.2% of BlackBerrys covered under SquareTrade’s warranties reported malfunctions, while a whopping 16.2% of Palm Treos had done the same, but only 5.6% of iPhone reported damage in the same period, mostly touchscreen-related and due to accidental damage.

While that might sound bad for BlackBerry, in the grand scheme of things, a 6% difference isn’t that much of gap between the two. I might be a bit biased, but I would hardly call my Bold unreliable. However, the survey does provide a lot of comparative perspective, and certainly justifies in one way why sales and customer satisfaction are higher among iPhone users; the smartphone feature sets may be comparable across the board, but how well those functions continue to work over the long haul could be the deciding differentiator.