The world has been waiting on pins and needles for BlackBerry maker RIM to launch their BlackBerry 9530 Storm smartphone. As the company’s first touchscreen BlackBerry handset, the BlackBerry Storm 9530 boasts a new kind of touchscreen that actually “clicks.” 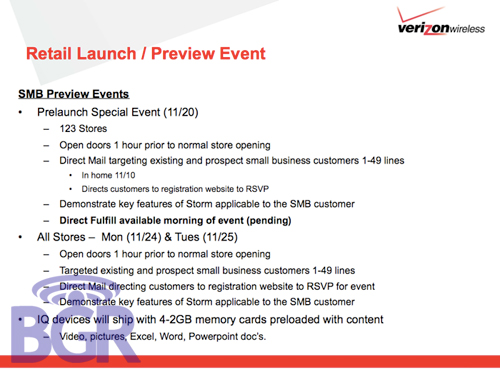 Well, today we have what could very well be solid launch information for Verizon’s BlackBerry 9530 Storm. Leaked Verizon internal documents point to November 24 as the planned (but things can, and probably will, change) launch date on Verizon’s network. The docs show a pre-launch event slated for 123 Verizon corporate stores, where loyal Verizon customers can put hands on the BlackBerry Storm and even pre-order their own Storm handset.

The rest of the US will have to wait until November 24 to experience the BlackBerry Storm. Pricing is confirmed to hit the oh-so-critical $200 price point that the iPhone 3G has proven to be the “sweet spot” among mobile phone consumers.

Those Europeans always get the good stuff. Not only do they get to put hands on the HTC Touch HD,...