China is the land of cheap handset rip-offs and otherwise low-quality handsets. Unfortunately for Nokia, that means Chinese-made clones of popular Nokia handsets are undercutting Nokia’s sales in emerging markets like India. The clones are made en masse and boast feature-sets that, on the surface, match those of the real-deal. But, upon closer inspection, it becomes clear that Chinese handsets are seriously lower quality than their legitimate counterparts from Nokia and Sony Ericsson. 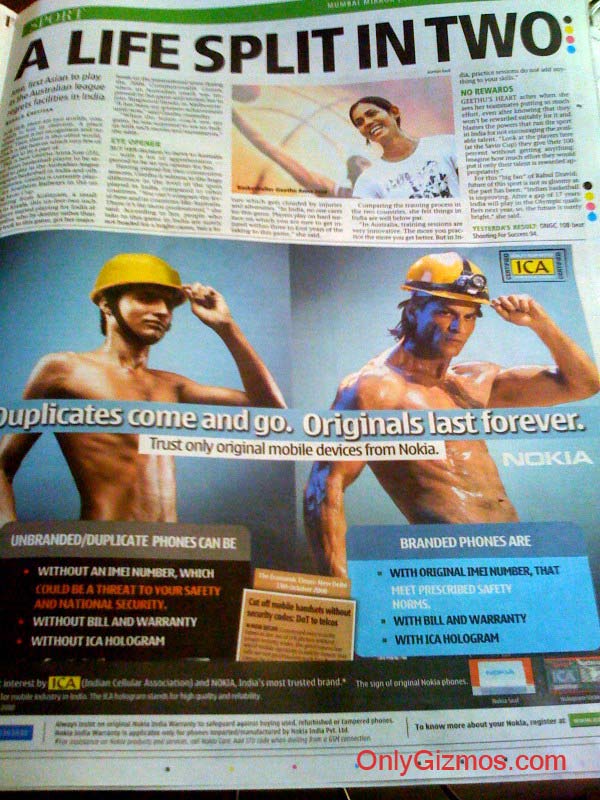 Nokia is making a big push to dominate emerging markets and so the prevalence of cheap, Chinese knock-offs is a significant threat to Nokia’s bottom line. To help combate Chinese manufacturers’ infringement on Nokia’s turf, the Finnish cellphone giant has take out a huge ad in the Mumbai Mirror that warns customers against buying those “puny,” “low quality” Chinese handsets.

Nokia warns that Chinese rip-offs could threaten national security by failing to have an IMEI number, might not come with “bill and warranty,” and won’t have the ICA hologram. Conversely, Nokia flaunts their legitimate handsets as being safe and secure with IMEI numbers assigned to each handset, come with bill and warranty, and sport ICA holograms.

Not to mention you actually get some high-quality hardware that doesn’t break down after a couple push-ups calls or fails to look like their online profile picture deliver on promises of smartphone capability or high-resolution cameras.

You can’t say our coverage of the up-to-minute Mobile stories isn’t there, be it devices, services, or Industry news –...