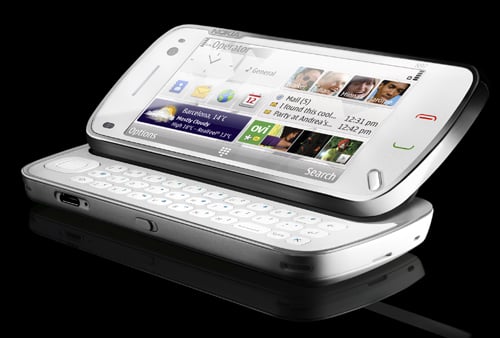 So much for Wednesday – the big announcement from Nokia World has dropped today instead, and it’s the N97 – a touchscreen slider with all the slanty goodness of the TyTN II due to hit store shelves in the first half of 2009 for EUR 550. We had heard rumours of a touchscreen N-series coming down the pipes, and it turns out they were right! Here are the N97’s specifications:

Social networking is apparently a big part of this handset, as it will make good use of GPS to integrate into services like Ovi and Friend View, although it’s really being marketed as a miniaturized laptop more than anything else. There’s still a fairly distinct line between UMPC and smartphone that the E-series Communicator straddles a little better than the N97 here, but we’ll let that slide. The N97 is also sporting a lot of draggable home screen widgets, a look reminiscent of Android and the TouchWiz UI. An S60 widget development platform has been in the works for awhile now, so you can expect third parties will be jumping on this one real soon. It looks like a great step to improving the smoothness of the Symbian experience and should make a solid addition to the N series. Pretty cool, huh? Who wants one?

Pictures and videos of the Nokia N97 after of the jump!