A $99 4GB iPhone 3G from Wal-Mart? Some say it will happen. Others expect the rumor to fizzle out. Let’s take a look at what’s being said.

There had been rumors that Apple was preparing to sell a cheaper, entry-level iPhone 3G for just $99 in the near-term. The rumor ties into confirmed reports that the iPhone 3G would be coming to Wal-Mart after Christmas.

The rumors also suggested that Apple was working on an iPhone 3G with a higher-resolution display or increased storage capacity. And, just last week, we heard speculation that a 4GB iPhone 3G would be available from Wal-Mart for just $99. 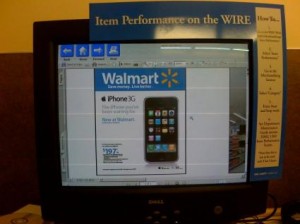 The current entry-level iPhone 3G features 8GB of on-board storage, and is priced at $199.

On the other hand, analysts are calling the $99 iPhone 3G from Wal-Mart an unlikely possibility. Apple’s image as a premium brand doesn’t jibe well with a cheap iPhone 3G. UBS analyst Maynard J. Um says that a $99 iPhone would be “atypical of Apple’s premium brand strategy ($149 seems more logical if a 4GB model were introduced). More likely is a scenario in which select Wal-Mart (& possibly Sam’s Clubs) are simply added as further iPhone distribution points (like the Best Buy announcement).”

Furthermore, MacRumors has uncovered evidence, in the way of training documents, that points to Wal-Mart selling the 8GB iPhone 3G for $197. That would put the Wal-Mart iPhone 3G at $2 cheaper than Apple’s own retail pricing. The discovery of these training materials essentially kills most hopes for a sub-$100 iPhone 3G coming to Wal-Mart in the near-term.

So, for those of you holding out for a $99 iPhone 3G, there’s still a slim chance that it will happen next year. For now, however, it seems that the $2-cheaper iPhone 3G from Wal-Mart is your best bet.

The mobile space is a brave new world for online advertisers. As the mobile advertising ecosystem matures, advertisements on mobile...