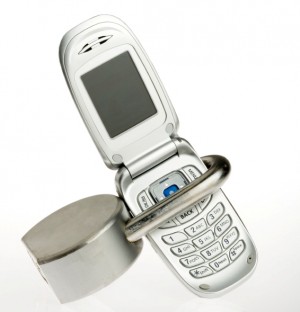 Mobile phones are getting ever more powerful. And, as cellphone feature-set keep growing, so do cellphone price-tags. It would make sense to protect your expensive handset. Even more sense with advanced devices that contain or can access sensitive and valuable data.

AT&T might just be working on ways to keep you and your precious handset together. AT&T patent applications hint at voice-recognition and location-specific cellphone security technologies in the works.

One patent, filed in 2004, called for a voice-recognition security system that would use a voice sample to determine if the user was authorized to access the handset. The voice sample would be ” analyzed to determine a corresponding selection ID, and a voice print is retrieved from the storage location corresponding to the selection ID and to an ID of the wireless telephone.” Presumably, the same technology could be used to determine just how much access a user is allowed to have, if any at all.

The other patent, also filed in 2004, details a security technology that would disable or completely lock a handset that roams too far from a pre-determined location. Using a “short range wireless signal,” AT&T envisioned a wireless network that would use signal-strength to determine when a device is taken further than allowed. The device would then be disabled until it saw a strong enough wireless signal, indicating that it was back within range.

Now, these patents were filed years ago, so it’s not exactly new news. We may never see these technologies come to market, but it sure would be nice if they did.

Mobile phones and their integration into daily life has changed the way the world communicates. But, the other side of...