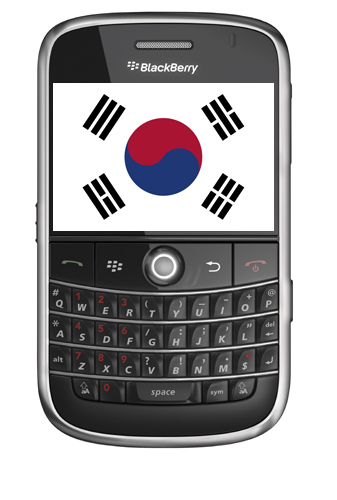 As of April 1st., South Korean regulators are lifting a rule that requires handsets to include particular software to access wireless internet, thus allowing the BlackBerry 9000 to get across the border. The Wireless Internet Platform for Interoperability (or WIPI) has held up many handset makers from entering the market due to additional installation costs, but the requirement will be fully abolished come April 1st. The Canadian Government had actually been shouldering South Korea to make an exception for BlackBerry since last year at least, but apparently demand wasn’t high enough at the time. In May, corporate sales were opened up, but the juicy consumer market still didn’t have access to the device. The situation seems to have changed now, however…

“We’re looking at a fairly good amount of customers even at the beginning of the launch,” [SK Telecom spokeswoman Lauren Kim said Thursday].

The regulation lift also opens the door for many other smartphone manufacturers who have stayed clear of South Korea in the past due to WIPI. Who’s next?

As predicted, Bell and Telus have coordinated their BlackBerry 9530 launches. Bell's offer matches up perfectly at $249.95 on a...