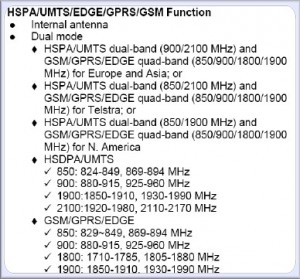 If you’ve been lamenting HTC’s decision to keep the HTC Touch HD and it’s huge and gloriously high-resolution touchscreen display out of the US, citing US 3G frequency incompatibility, have we got some good news for you!

The HTC Touch HD, it turns out, is compatible with 3G networks running the 850/1900Mhz spectrum.

In a surprising turn of events, HTC has released the HTC Touch HD’s service manual. The manual reveals that the HTC Touch HD is, in fact, capable of surfing 3G data networks in the US.

It seems that HTC decided to endow their high-end touchscreen smartphone with the necessary 3G hardware to work on just about any 3G network in the world. We knew that the HTC Touch HD would sport 3G frequency support in the 900Mhz and 2100Mhz WCDMA bands, but we had no idea HTC would sneak in support for the 850Mhz WCDMA band that us Yankees love so much. Unfortunately, the HTC Touch HD’s newfound US 3G compatibility isn’t likely to prompt any US carrier (AT&T, we’re looking at you) to pick up the HTC Touch HD in subsidized form.

The good news, however, is that HTC Touch HD fans can import an HD and rest easy knowing that it’s fully functional within US borders. With a 3.8-inch WVGA touchscreen (480 x 800 WVGA), 5 megapixel camera, full 3G support, GPS and WiFi under the hood, the HTC Touch HD is without a doubt a handset worthy of importing into the US. Start scrounging for couch-change!

The T-Mobile G1 has distinction of being the world's first-ever Android-powered smartphone. With an all-glass capacitance touchscreen and finger-friendly Android...