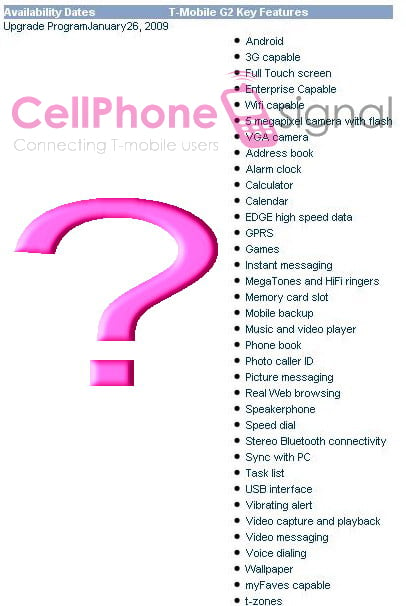 The T-Mobile G1 has distinction of being the world’s first-ever Android-powered smartphone. With an all-glass capacitance touchscreen and finger-friendly Android UI, the T-Mobile G1 is about as good as it gets in the Android-space.

Today, we’re hearing that the T-Mobile G1’s successor, the T-Mobile G2, may be coming down the product pipeline faster than we had expected.

A leaked document sent to Cellphone Signal outlines the T-Mobile G2’s feature-set and sets a launch window for January 26. It’s not clear who will be manufacturing the alleged T-Mobile G2, but given HTC’s hand in making the T-Mobile G1, it’s not too hard to see HTC crunching out the G1’s successor.

The rumors T-Mobile G2 sports an impressive feature-set that should make even power-users jump with glee:

Oh, and that front-facing VGA camera? Yeah, T-Mobile might be rolling out some sort of video-calling service next year.

We’ll keep our ears open for more details on the T-Mobile G2.

In order to promote its high-end camera phone, MOTOZINE ZN5, Motorola has challenged eight up-and-coming photographers from around the world...