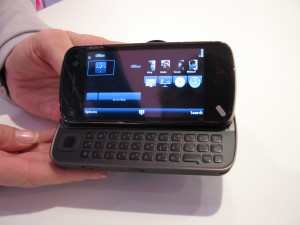 The Palm Pre remained the elephant in the room for most of our CES 2009, but we did manage to catch up on everything else happening on our last day. The morning kicked off with an extensive tour of the Nokia booth (Will had a looksee too). I got some playtime with the very nice N97 announced in December, which had mostly the same UI as the 5800 XpressMusic, but plenty of hardware upgrades, including a beefier camera and slide-out keypad. Nokia was predominately pitching the N97 as a mobile computer, but after seeing the OQO II, I’m going to take some issue with that designation. They said a US launch was to be determined, but at least they’re talking about it.

They showed me around a couple of other handsets, like the N79 and N85, and the quaintly ergonomic 1006, but what was really cool in the Nokia booth were two programs that were still in the research stages. First up was Local Sensor, which let Nokia devices to home in on sensor fobs that you would attach to stuff like keychains, allowing you to play hot and cold when you couldn’t find what you needed. There are a lot of possibilities for something like this – throw a fob in your car so you can find it in parking garages, expanding location-based gaming, all sorts of stuff. The technology is “a few years” away, but something to look forward to.

The next thing from Nokia that really caught my eye was Point and Find. It’s a little closer to completion than the Local Sensor, but demands quite a bit of third-party support. Basically the app would allow Nokia-bearers to point their camera at something they liked and get related information immediately. In the demo, they pointed to a poster for one of the latest Ice Age movies (damned if I can remember which one they’re on now), and the phone pulled up a link to a trailer. Very cool stuff, but it is highly dependent on the sources (movie-makers in this case) to populate picture databases and input linking material. Retail, movie, and real estate industries are the ones most likely to bite first, but I’m curious who else would bite… A beta program will be launched in the UK by the end of January for those looking to give Point and Find a shot.

You might remember my post yesterday about the new Sony Ericsson Cyber-shot C510... and the promo video that came with....