Just this morning we saw HTC’s 2009 product lineup leaked out to the various corners of the web. And, as these types of things usually go, everyone and their sister are speculating as to what the unreleased devices are packing under the hood and to what carriers they’re ultimately destined for. 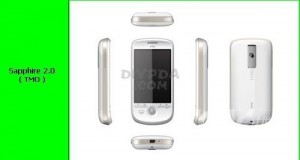 The latest rumblings along the grapevine indicate that we’ve just seen the first images of the T-Mobile G1’s successor – the Android-powered T-Mobile G2.

Among the couple dozen smartphones leaked today, the HTC Sapphire 2.0 is being billed as a potential T-Mobile G2 candidate. The HTC Sapphire 2.0 is likely headed to T-Mobile, as is probably evidenced by the “TMO” clearly stamped underneath the Sapphire 2.0’s codename (pictured left). The handset features what looks to be a T-Mobile myFaves button (a dedicated button that T-Mobile handsets have been known to feature) in the lower-left corner of the device, and the “2.0” appended to the model name seems to hint at its role as the T-Mobile G2.

The HTC Sapphire 2.0 also sports the same curvy lines and track-ball that we see in the T-Mobile G1, but lacks any visible keyboard. If this particular handset does indeed turn out to be the G2, it will likely be running an as-yet-unreleased build of Android OS that supports virtual keyboard inputs (Cupcake).

Interestingly, the Android OS Cupcake development branch is expected to release their on-screen, virtual keyboard for the Android OS this month. And, previously leaked documents hint at T-Mobile launching their T-Mobile G2 as soon as January 26. Could we see Cupcake going live in early January and leading up to the HTC Sapphire 2.0’s introduction as the T-Mobile G2 in late January? The timing seems too good to be coincidence, doesn’t it?