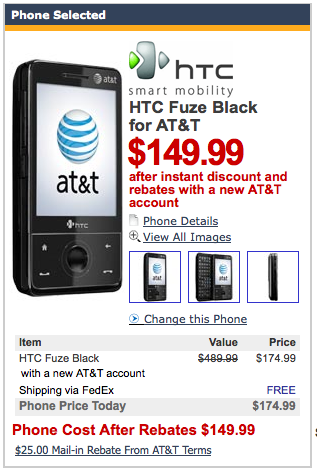 While AT&T’s own-branded HTC Touch Pro, the AT&T Fuze, has quickly risen through the Windows Mobile smartphone ranks to become one of HTC’s most prolific and popular WinMo handsets, the steep price-tag has undoubtedly kept the Fuze from soaring to even higher heights. That may all change, now that the AT&T Fuze is being offered for the entirely affordable price of just $150 from NewEgg.com.

The AT&T Fuze gets high marks for its feature-set and flexibility (the Fuze will happily follow you from work, to school, to gym, to a night out on the town). The keyboard is finished with a soft-touch rubberized coating that makes it a joy to use. The camera serves up crisp pictures, while the TouchFLO 3D UI keeps things fun and organized. There’s really nothing bad we can say about the AT&T Fuze – except for its once-prohibitive price tag.

Fortunately, the new price-point comes in at almost half the original asking price for the AT&T Fuze. Of course, a new two-year contract is required and mail-in rebates also come into the equation. But, hey, for $150, you really can’t ask for a better deal on the hottest Windows Mobile smartphone currently on market.