As President-elect Barack Obama prepares to take over the reigns at the White House as the first African-American POTUS (that’s President of The United States, for the uninitiated), a Kenyan cellphone manufacturer has released a new mobile phone to cash-in on the Obama-hype. Dubbed the Mi-Obama, the Obama-branded mobile phone from Mi Phone sports a simple design that proudly bears Obama’s name emblazoned above his now-famous slogan “Yes We Can” on the backside of the device.

“The coming of the new President of the USA is an auspicious moment for all Kenyans and the people of Africa. It is our pleasure to be able to launch the Mi-Obama phone as a memento that will always stay within the user’s hearts and minds” says Alpesh Patel, Director of Mi-Fone. 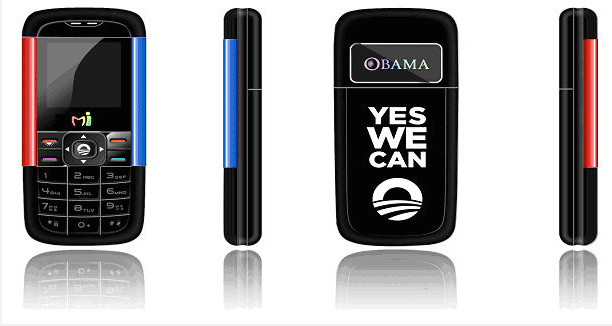 The POTUS-to-be has been lauded as a techie comfortable using high-technology to boost productivity, but we’re going to go out on a limb and presume that Obama won’t be using a Mi-Obama anytime soon. After all, Obama has NSA-approved smartphones to choose from.

The bi-partisan Mi-Obama will be available in Kenya for about $30.

While AT&T's own-branded HTC Touch Pro, the AT&T Fuze, has quickly risen through the Windows Mobile smartphone ranks to become...