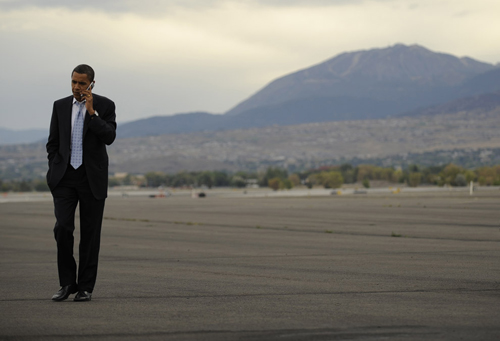 Freshly-minted President of the United States of America Barack Obama is a lot of things, bona fide “techie” among them. Obama has leveraged social media technologies like SMS text messages, social networks, tweets, and email to help rally his Presidential candidacy all the way to the White House. And, as Simon mentioned below, now that Obama has taken office, he’s set on keeping his BlackBerry smartphone on him at all times.

For national security reasons, Mr. Obama won’t be allowed to use his BlackBerry for any official government communiques. Instead, the new POTUS will be issued an NSA-approved Sectera Edge, made by General Dynamics, to do his hush-hush bidding. But, for personal chit-chats with friends and family, President Obama will be calling on his trusty BlackBerry to handle all his emailing, texting, contact-keeping, and calendar-arranging needs. Despite concerns that Obama’s BlackBerry communications could potentially bring embarrassment to the new administration, Barack Obama is apparently set on keeping his BlackBerry by his side.

News that Obama will be holding on to his BlackBerry handset isn’t all that exciting, we’ll admit. But, think about this – Mr. Obama is the first US President to know enough about technology that he’s demanding to keep his BlackBerry in his pocket (who’s going to argue?). We’re used to seeing government and corporate execs thrust into leadership roles with almost no practical experience in technology, so it’s exciting to finally see a US leader with the kind of tech-savvy that Obama exudes.

The iPhone 3G has barely landed on Taiwanese shores and retailers are already lauding Apple's success in cracking the island's...