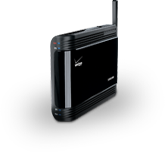 Femtocells have been gaining traction as a signal-boosting alternative to moving homes or switching wireless carriers. Sprint recently launched their Sprint Airave femtocell, giving signal-hungry Sprint customers the option to put a pint-sized cellular tower in their living rooms. Not to be outdone by their rival CDMA network, Verizon Wireless has launched their own Network Extender femtocel.

Verizon missed their late-2008 launch windows for their femtocell offering, but the carrier has finally made good on their promise to improve signal quality for reception-seeking Verizon customers.

Like all femtocells, the Verizon Network Extender femtocell essentially sets itself up as a mini cell-tower in your home, routing all network traffic through your broadband internet connection. The Verizon Network Extender femtocell deploys a home-sized 5,000 squre-foot wireless umbrella (a CDMA network, in this case) that promises to max-out your mobile phone’s signal-strength indicator. The Network Extender will support up to 3 simultaneous cellphone conversations at the same time, giving families the option to take advantage of full-strength cellular reception at the same time.

Want your own Verizon cellphone tower in your house? Grab the Verizon Wireless Network Extender for $249.99.

Still not sure how a femtocell works? Here ya go...